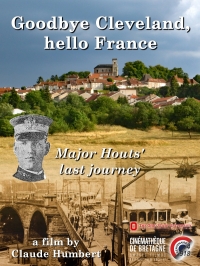 A film in honor of Euclid resident Arthur Samuel Houts

Regular readers of the Euclid Observer might remember the story I submitted almost three years ago (Vol 6 Issue 9 / Sept. 2015 & Vol 7 Issue 1 / Jan. 2016). I told you about Arthur Samuel Houts, whose trunk I found at my great-aunt's a few decades ago in a small French village.

Arthur Houts was born on May 31st, 1880, in Mount Vernon, Posey County, Indiana. He moved to Euclid in the early 1900s. He both was enlisted in the 5th Regiment of the Ohio National Guard, and worked at the Brown Hoisting Machinery Company. While working in Cleveland, he was a resident of Euclid. He married Georgina Crichton in 1903, and they had a son, Kenneth, that same year. They lived at Stop 130, Lakeshore boulevard - today that would be Lakeshore Boulevard and 200th street.

In 1917, Major Houts left his family to serve in the 37th Division, and the American Expeditionary Force. He was killed in action on Sept. 29, 1918, near Montfaucon d'Argonne, France, during the Meuse-Argonne offensive.

In Sept. 2015, Valerie and I came to Euclid to learn more about him and about the city of Euclid. The Euclid Historical Society greatly helped, and so did John Copic. In Ohio, we also visited Cleveland, home of the 5th O.N.G., and Camp Perry. In Alabama, we followed his steps in Montgomery, where Camp Sheridan was built for (and mostly by) the Buckeye (37th) Division. In New Jersey, we visited Hoboken, where he boarded the U.S.S. Leviathan. In France, we visited Brest, Bourmont, Baccarat, Tremont, Montfaucon, and finally, the Meuse-Argonne American cemetery at Romagne.

Time has come to give you some update. The story of Major Houts became a documentary film, titled Goodbye Cleveland, hello France. Several screenings already took place in France, and more are planned between Sept. and Nov. With the help of the Theater Departement of the Ohio State University (OSU) and the involvment of Lesley Ferris, I could realise an English-language version of the film, and now the documentary is coming to the United States. Screenings are already planned in Altanta, GA, in Wichita, KS, in Detroit, MI. In Ohio, the OSU is working on arranging a screening in Columbus, and we will attend the 37th Division Veterans Association 100th annual meeting at Camp Perry on Aug. 25-26.