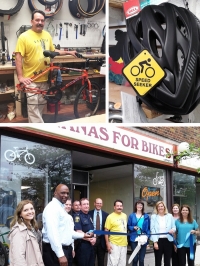 Mayor Holzheimer Gail, Councilwoman McIntosh, City staff and the Euclid Chamber of Commerce celebrated the grand opening of ‘Bananas for Bikes’ with Owner Duane Mierzejewski and his new customers in May 2018.

Even before Duane Mierzejewski officially opened shop in mid-May 2018, he had a loyal following of cyclists and vintage bicycle enthusiasts. It has been many years since Euclid – a growing bike-friendly community - had a bike shop and repair place in Downtown. In anticipation of this opening, multiple residents stopped by to wish the new business owner well, and to thank him for adding vitality and another amenity to Euclid’s diverse businesses.

“I’ve received wonderful support from the community… from individuals excited to shop local to the relationship I’m forming with Bike Euclid”, noted Duane as he served his first customer during the grand opening on May 22. “The City of Euclid and the Euclid Chamber of Commerce were great to work with throughout the entire process.”

Sheila Gibbons, Executive Director of the Euclid Chamber of Commerce added, "when we first met Duane, he was preparing for his store opening and was looking for information.  He attended some of our free small business workshops, met with us to discuss his business plans and we offered assistance and resources to guide him along the way. It is exciting to see his business open now and we are so happy for him."

Mary Garty, a friend and customer of Duane’s, noted that this has been the shop owner’s dream for a long time. “It’s so exciting to see his vision come to life, and it’s fantastic to know he has the support of the Chamber and City”, she commented.

Duane selected Euclid to establish ‘Bananas for Bikes’ because the Euclid has been his home since 2011. When he saw that there was a vacancy in a storefront equidistant from two city-owned bike racks and along a national bike route, he had to act on this dream of opening a bike shop. “Before this, I was in a storage unit collecting and repairing bikes,” Duane lamented. “No one could see me or the bicycles I had refurbished for sale. This location is a game changer. I’m highly visible and the neighborhood is great.”

Duane’s business model is steeped in his love for the cycling community. In addition to selling ‘traditional’ and ‘banana’ style bikes and racks of cycling accessories for kids and adults, he hopes to create social programming. His plan is to launch Critical Mass-style vintage bicycle rides this summer which take advantage of Euclid’s trails and bike infrastructure. He is also enjoying restoring bicycles back to riding condition and listening to his customers’ stories of their first banana bike.

Stop in to ‘Bananas for Bikes’ at 21936 Lakeshore Boulevard for all of your cycling needs Tuesday, Thursday, Saturday and Sunday from 10am to 6pm, with extended hours from 10am to 8pm on Wednesday and Friday. Check out www.facebook.com/Bananasforbikes wh