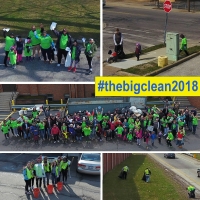 Thanks to the hundreds of volunteers and dozens of sponsors who made 'The Big Clean 2018' a success! Euclid was the winner, collecting nearly 200 bags of litter.

Hundreds of Euclid and Collinwood residents took to the streets, parks, tree lawns, and highway ramps on Saturday, April 21st for ‘The Big Clean 2018’, the second annual cleanup competition between the two communities.

Euclid was once again victorious, collecting nearly 200 bags of trash in just a few hours.

Ward 3 Councilperson Taneika Hill is a returning participant to the now annual event. “Most people would not be excited about spending a Saturday morning picking up trash,” she commented, “but I find a great deal of satisfaction participating and seeing so many members of my community come out to be the change they want to see.”

“I have received phone calls from (people) that want to make a neighborhood cleanup a regular thing. What a way to make a positive impact,” Councilperson Hill continued, “I am so glad to be a part of such an awesome thing.”

Eleven year-old Adam Turos and his sister Lauren Turos, eight, could not agree more. They were astounded by the litter in their neighborhood. “There were a million cigarette butts and I wish people dropped as much money as they do trash,” commented Adam, who found $1 near Mary Mavec school. Lauren noted an especially large quantity of cigarette butts in the garden by CVS on Lakeshore Boulevard. The most interesting thing she found was a smashed Dora microphone.

After a morning spent picking up litter, Adam observed that the City could install “ash trays on the sidewalks and corners.” It is a great observation, and a project that the City of Euclid will roll out later this year thanks to a Cigarette Litter Prevention Program grant from Keep America Beautiful.

If you participated in the cleanup, please share your photographs on social media using the hashtag #thebigclean2018 and/or by sending photographs to keepeuclidbeautiful@cityofeuclid.com