West African Specialties to be Discovered in Downtown Euclid 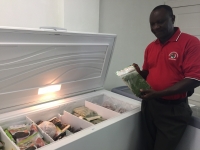 While driving, walking, or biking on Lakeshore Boulevard you may have noticed that a bunch of gleaming red balloons replaced brown paper in the windows of Downtown Euclid’s newest business. African Variety Market and Catering celebrated their official grand opening on Saturday, September 23rd after a soft opening during the Art Walk the evening before. The storefront is located at 21932 Lakeshore Boulevard next to Paragon.

Owner Asu Pelima, Sr was all smiles during the opening as he proudly led customers around the storefront to show off a variety of food and other items native to Liberia, his home country in West Africa.

You may remember Pelima from his shop on E.200th Street a few years, ago. At the time he and his business partners were juggling fulltime employment in addition to the Market. They were not able to provide the opening hours the customers wanted and closed the shop. Now, Pelima is all-in on the second iteration of the Market with extended hours on weekdays and Saturdays (from 9am to 9pm) and on Sundays from 1-5pm to serve his returning and new customers.

The focus of this storefront is on variety and quality. A large stock of frozen foods from the familiar (tilapia) to the less-so (cassava leaves and chicken feet) are available daily while new items are planned to pop-up as customers make special requests. Do not be intimidated by the foreign foods. Pelima is happy to provide recipes and cooking suggestions to anyone interested in trying a new-to-them product such as fufu, a plantain-like dish.

Unique clothing and other gifts round out the Market’s offerings alongside convenience products like cold drinks, cleaning, and bath items. Catering off-premise is available through the Market and eventually Pelima plans to convert the rear of the storefront into a commercial cooking space.

Another great place to shop and eat local in Downtown Euclid.