ADL Chooses a Local Catholic Educator for Expedition to Israel 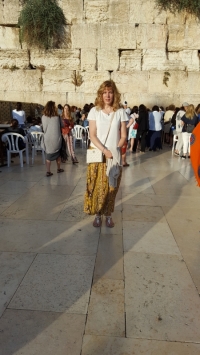 Mrs. Garuckas at the (Wailing) Wall

New York, NY, July 26, 2017 … Catholic school educators from across the country returned from a unique educational expedition to Israel facilitated by the Anti-Defamation League (ADL).  Middle and high school educators from 15 states participated in ADL’s nationally acclaimed Bearing Witness Advanced program, the only initiative of its kind within the Jewish and Catholic communities. Patrice Garuckas, the Upper School religion teacher from Ss. Robert and William Catholic School in Euclid was honored to be one of the 19 educators chosen for this once-in-a-lifetime experience. In the summer of 2016, Patrice was selected to participate in the Bearing Witness program in Washington DC which provides Catholic school educators with training and resources to help their students understand the history of anti-Semitism, the Holocaust, and modern manifestations of prejudice.  The week-long program created in 1995 by the ADL’s Washington, DC Regional Office, the Archdiocese of Washington, and the United States Holocaust Memorial Museum, and in cooperation with the United States Conference of Catholic Bishops, the National Cathedral Education Association, and Georgetown University, Bearing Witness is changing relations between Catholics and Jews. Completion of the program in Washington, allowed Patrice the opportunity to complete the essays and application for The Jack Rudin Bearing Witness Advanced program in Israel.

Patrice summed up the experience in the following way: “I was elated, overwhelmed and humbled to be chosen as one of the participants and I had great expectations. However, my expectations were far exceeded by the experience itself. Each sacred site we visited, every speaker we experienced, every person whom we met made a lasting impression upon me. I learned more about the Jewish faith and culture than I could possibly learn in a class or from a text. I experienced the tragedies, triumphs, and resiliency of the Israeli people. I gained a greater understanding of the Israeli-Palestinian conflict. And perhaps most importantly, I observed the great faith, generosity, forgiveness, and resolve of the Jewish people living in Israel. As one speaker so aptly stated, ‘the Israelis are living normal lives in an abnormal situation.’ The threats which surround Israel are always looming. I have a great respect and admiration for the people of Israel.”

This year, participants had the opportunity to experience Israel from the modern, high-tech city of Tel Aviv and the Old City of Jerusalem to the biblical town of Nazareth and the Golan Heights. They visited Jewish, Christian and Muslim holy sites including the Western Wall, the Church of the Holy Sepulcher, the Church of the Annunciation, the Mount of Beatitudes and a mosque in Taibe. The group also visited Yad Vashem, Israel’s national memorial to the Holocaust and met with educators, journalists, community leaders, interfaith experts and scholars representing diverse religious, political and cultural perspectives.

“This is a truly once-in-a-lifetime experience for Catholic educators, allowing them to see for themselves and understand the complexities and realities of Israel, contemporary anti-Semitism and the theological and historical foundations of their own faith and its relationship to Judaism,” said David S. Waren, ADL Vice President of Regional Operations and Advancement, who briefed the participants during the mission. “Our ultimate goal is to enable them to present these vital topics to their students in ways that are objective, relevant and motivating.”

“The Catholic and Jewish communities have reached an important crossroad as we have truly moved from historic enmity to brotherhood and deep mutual respect,” said Jonathan A. Greenblatt, ADL CEO. “With Pope Francis elevating and placing a significant emphasis on interreligious engagement, such a mission is as timely as ever.”

Patrice Garuckas would like to see a similar program initiated by the Catholic Church to continue the training Bearing Witness Advanced educators began in Israel. Further instruction about Catholic-Jewish relations by Vatican officials in Rome would provide a thorough completion of the topics studied through the generosity and work of the ADL in Israel. Such valuable knowledge taken into Catholic school classrooms around the country would be invaluable. Since Pope Francis is dedicated to enhancing interreligious dialogue, perhaps an educator experience in the Vatican will become the third part of the Bearing Witness program very soon. In the meantime, Patrice is looking forward to sharing her experiences in Israel with her students at Ss. Robert and William Catholic School.