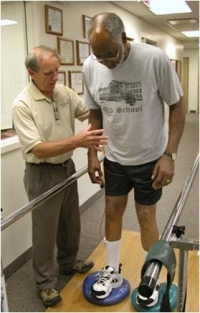 In 2007, Glenda Jimmo, a 78 year old mother of four was denied necessary  at  home skilled care for  home health services on the basis of non-improvement.  She suffered from a partially amputated leg and was legally blind from complications due to diabetes. After multiple appeals to Medicare were exhausted to no avail, Glenda sought help from Legal Aid in Vermont in January of 2011.

A federal class action lawsuit was filed in court, won, and a judgement was entered in January of 2013 in federal court. The consensus stated the standard for skilled care, (rehab) coverage paid by Medicare was NOT improvement. Pursuant to Jimmo, medically necessary nursing and therapy services, provided by or under the supervision of skilled personnel, are covered by Medicare if the services are needed to maintain the person’s condition or to prevent or slow their decline.

After the settlement, officials agreed to rewrite the Medicare policy manuals. This was a landmark victory for Medicare beneficiaries with chronic conditions and disabilities denied coverage under the previous “improvement standard”, imposed by care necessary to improve with additional treatment. The new “standard” requires a doctor's order for skilled care to preserve health or slow deterioration.

Another benefit of this judgement gives seniors a second chance to appeal for coverage if their claims had been denied through lack of improvement. If you or someone you know has a claim which has been denied and your appeal period has lapsed, you can receive a self help packet for reimbursement at improvement@medicareadvocacy.org.

Gabe Quintanilla, a lawyer from San Antonio refused to sign non coverage forms at least seven times for his 92 year old mother’s physical and speech therapy following her stroke due to not improving. One doctor even suggested hospice care.  He forwarded copies of the Jimmo judgement to her doctor, insurance carrier and her home care agency. Even though she had a Medicare Advantage plan, a private health insurance program. They must comply with the settlement as Medicare Advantage plans are required to provide coverage to be at least equal to that offered by traditional Medicare. Gabe’s mother did receive follow up care at a rehab facility. Despite dire predictions, she not only maintained but celebrated slight improvements.

While the standard has changed, CMS has been remiss in educating providers, billing contractors, and appeals judges. In February of 2017, the Court mandated the corrective action be implemented by September 4,2017. The following self-help packets for home care, outpatient care and rehab are now available at  http://www.medicareadvocacy.org/take-action/self-help-packets-for-medicare-appeals/.

As always, if you have any questions, need clarification or if I can be of service you can email me, call me or checkout my website:  www.nestingnet.com.

Serving seniors since 1999, Ginny Calvey is a certified licensed Insurance Broker representing all the the major carriers of both health and financial products designed to protect seniors through retirement and beyond. Her mission is service and she strives to not only provide education but explore all the options to which you are entitled. She is featured in My Medicare Question.com and author of "Life's Little Black Book>. Call for a free consultation.