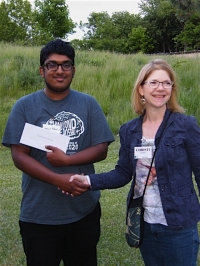 The Friends of Euclid Creek (FOEC) is pleased to announce that the recipient of its 2016 annual Environmental Education scholarship is Hrishikesh "Gopal" Mandal.  The $1,000 scholarship is awarded to a student residing in the Euclid Creek watershed who has exhibited the potential to make a contribution to the environment through a related field of study.

Gopal is a recent graduate of Mayfield High School and will be attending Case Western Reserve University in the fall.  His desire is to be a professor or researcher who helps to protect and preserve nature.

Gopal was involved in several research projects in high school, including one in which he studied the effects of deforestation on the local salamander population.  He also won an award at the Northeast Ohio Science and Engineering Fair for a self-designed research project studying acid degradation of brownfields.

Gopal has participated in many extracurricular activities, including the History, Spanish and Chess Clubs, he enjoys singing and the theatre, and is inspired by tutoring other students.  He expresses a deep passion for the environment and for scientific research.  This passion and his focused research make him a deserving recipient of the 2016 FOEC Environmental Education scholarship.

The Friends of Euclid Creek's mission is to raise awareness about and preserve the natural features of the Euclid Creek watershed.

I'm the Euclid Creek Watershed Coordinator working out of Cuyahoga Soil and Water Conservation District office with the Friends of Euclid Creek.