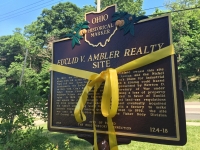 Historical Marker Text: By 1922, the Ambler Realty Company of Cleveland owned this site along with 68 acres of land between Euclid Avenue and the Nickel Plate rail line. Upon learning of the company’s plans for industrial development, the Euclid Village Council enacted a zoning code based on New York City’s building restrictions. Represented by Newton D. Baker, former Cleveland mayor and U.S. Secretary of War under Woodrow Wilson, Ambler sued the village claiming a loss of property value. In 1926, the U.S. Supreme Court ruled in favor of Euclid and upheld the constitutionality of zoning and land-use regulations by local governments. The federal government eventually acquired the Ambler site during World War II to build a factory to make aircraft engines and landing gear. From 1948 to 1992, the site was used as a production facility by the Fisher Body Division of General Motors.

On a gorgeous afternoon on June 9th, 2016, the City of Euclid and the Euclid Landmarks Commission dedicated an Ohio Historical Marker to formally recognize the site at the center of the U.S. Supreme Court case The Village of Euclid v. Ambler Realty Co. (1926).

Euclid v. Ambler Realty is nationally known for establishing the constitutionality of zoning and land-use regulations throughout the country. The subject property consisted of roughly 68 acres of land located between Euclid Avenue and the Nickle Plate Rail Line.  The site, located in Ward 1, was ultimately developed for industrial purposes during World War II.

Today, the historic property is owned by HGR Industrial Surplus and has a bright future, with HGR investing millions and attracting major new tenants. The site is also home to the NEO Sports Plant and the Euclid Police Mini-Station.

In her welcome address, Mayor Kirsten Holzheimer Gail commended the Euclid Planning Commission for continuing the legacy of thoughtful planning in Euclid as well as the Landmarks Commission which helped prepare the marker application.

The dedication featured remarks by Ohio House District 8 Representative Kent Smith and Ohio Senate District 25 Senator Kenny Yuko and a keynote address by Paul Oyaski, former Mayor of the City of Euclid. In his address, Mr. Oyaski painted a picture of Northeast Ohio circa 1926 and made fascinating the details of the of both the local and Supreme Court cases.

Ward I Councilwoman Stephana Caviness was in attendance along with many residents. She remarked “in 2013, as the council rep, I became very curious about this property and the "phantom" street that runs through the middle of the parking lot.  I began my research and discovered that this site held historical significance.  I discovered that The Inland Plant (as it was later known) became the battle ground between The Village of Euclid, Ohio and Ambler Realty Co. …a United States Supreme Court landmark case that was argued in 1926.  The final decision of the case substantially bolstered zoning ordinances in towns nationwide in the United States, Canada, and other countries throughout the world.  Euclid's Planning and Development Director, Jonathan Holody and I had several discussions about this historic site. With his due diligence, we now have an area that reflects the rich history of Euclid.  We are also very proud to have HGR to have taken ownership. Looking forward to the many improvements planned for this site. Thank you to Mayor Holzheimer-Gail, The Euclid Historical Society, and the Landmarks Commission for their efforts in this project."

The marker purchase and dedication event were made possible through the generous support of Calfee, Halter & Griswold LLP, the Ohio Chapter and Cleveland section of the American Planning Association and a grant from the Ohio History Connection’s Historical Markers Program.

Stop by the marker just east of the Euclid Police Mini-Station at 20001 Euclid Avenue.  The Euclid Historical Society and Museum, located at 21129 North Street, Euclid, Ohio, is another great place to visit and learn more about the Euclid v. Ambler Realty case and the rich history of the City of Euclid.

Allison Lukacsy is the Community Projects Manager at the City of Euclid. You can reach her at (216) 289-8160 or by email at alukacsy@cityofeuclid.com