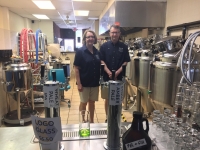 The City of Euclid is thrilled to welcome another new, small business - the much anticipated Euclid Brewing Company located in a storefront at 21950 Lake Shore Boulevard next door to Lake Shore Coffee House.

The brewery, which opened in May 2016 with local couple Doug and Kim Fry at the helm, enjoys an excellent tagline: “Because every great city should have its own brewery.”
Indeed, it’s popular opinion that this is the city’s first craft brewery.

Earlier this year, Doug left his job as a principal scientist with Ricerca to launch this business. His experimentation with brewing began in 2005 when he was gifted a Mr. Beer homebrew starter kit. Doug’s background in chemistry, affinity for Euclid and desire to keep busy post-retirement culminates in this brewery, which for the time being uses a two-barrel system.

While there is not a kitchen, there is no shortage of nearby food options which you are welcome to bring in. Pull up a stool to a reclaimed laboratory table top or the bar, overlooking the brewing equipment. With a rotating of seasonal craft beers planned, this spot is sure to be a destination for both Euclid residents and those further afield.

Euclid Brewing Company launched with limited hours to start. Enjoy Doug’s favorite, the Pale Ale, Thursdays from 4-7pm, Fridays from 4-8pm and Saturdays between 2 and 7pm. Check for updates on days, times and what is newly on tap at www.facebook.com/EuclidBrewingCompany.

Allison Lukacsy is the Community Projects Manager at the City of Euclid. You can reach her at (216) 289-8160 or by email at alukacsy@cityofeuclid.com