by By John Sheridan 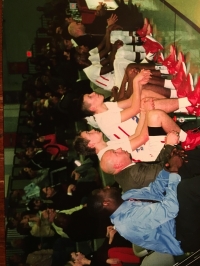 Players and coaches on the bench were engrossed by the action on the court during VASJ's victory over Louisville St. Thomas Aquinas on February 19, 2016 in the final regular season basketball game - a tune-up for the OHSAA playoffs. It was a tight game most of the way, with the score knotted at 45 - 45 with just a few minutes remaining. However, the Vikings staged a scoring spurt at the end to notch a 61 - 51 triumph.

Coach Babe Kwasniak's squad followed up with a lopsided 86 - 55 victory against Kirtland in the first tournament game on February 26, 2016. Alonzo Gaffney, a 6-foot-7 freshman, paced the scoring with 18 points, while Sherman Dean, III added 15 and Dan McGarry 10. The Vikings advanced to a district semifinal contest at Garfield Heights. Winner of the March 4, 2016 district final will advance to the Canton Regional tournament.