From Euclid to Hoboken 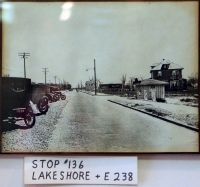 In the September issue of the Euclid Observer, I told you about the journey Valerie and I were just about to make in the footsteps of Major Arthur Houts, who lived in Euclid with his wife Georgina (born Crichton in 1884) and their son Kenneth (1903-1985) in the 1910s.

Our journey is now over. We have gathered new information, and hundreds of pictures, old and new, and we still have to put all this together. This is our first attempt to sum up what we have experienced, and what we have learned.

Indeed, we have had a busy stay in the United States. We have met a lot of interesting, friendly, and helpful people, be it in Ohio or Alabama.

Starting with Euclid, we met John Copic of the Euclid Observer. John drove us through Euclid, showing us places we had missed on our way from our hotel in Cleveland to Euclid.

John took us to the Euclid Historical Society and Museum. I encourage everyone in Euclid who has not visited them yet to spare some time and meet them – and why not join them! They were very friendly and helpful. The last known address of Major Houts was Stop 130, Lakeshore, Euclid. I had figured it could refer to something like a railway stop. The Euclid Historical Society confirmed that: two trolley lines operated by the Cleveland, Painesville, and Eastern Railway, ran through Euclid, and one of them followed Lakeshore Boulevard. The Euclid Historical Society was not able to locate Stop 130 during our visit, but I eventualy found Stop 130 on a map from their archives. On this 1912 map, Stop 130 is at Lakeshore & Cut Road (now E 200th Street).

We also met retired Colonel John Jenkins, president of the 37th Division Veterans Association, and his wife Rose, who drove us to Camp Perry. The camp has a rare souvenir from France: one of the 48 train cars offered by France to the United States after WWII. It was part of a gratitude train, filled with presents from several French cities or provinces. The car in Camp Perry was built in 1913. It is of the famous 40 and 8 model – in fact 40 or 8, as it could hold 40 men or 8 horses. It was in cars like these that the soldiers of the American Expeditionary Forces (AEF) travelled through France during WWI.

Our stay in Alabama was also very dense. In August 1917, Major Houts was among the first ones to leave Ohio to supervise the building of Camp Sheridan in the northern part of Montgomery, out of former cotton fields.

In Montgomery, two small pieces of Ohio can be found. The first one is on the Southern side of the Alabama Capitol: every State is represented here, both with its flag, and with a local stone. Another stone can be found on the site of former Camp Sheridan. It has been brought here in memory of the Ohioans who had been trained at Camp Sheridan in 1917-1918.

We also visited the Montgomery County Historical Society. The people there did more than their best to help us, much like at the Euclid Historical Society. They have their own archives – and very rich ones indeed! Afterwards, we went to the Alabama Department of Archives and History. Thanks to archivist Keri Hallford, and with a hint from the Montgomery County Historical Society, we could find a map of the trenches in Camp Sheridan, dug for training purposes. Like on the actual frontline, the trenches wore names. The enemy trenches were named after Hamburg and Frankfort. The US trenches were named Cleveland, Superior, and... Euclid! To be more precise, Euclid seems to be a communication trench.

To follow as closely as possible the journey of Major Houts, we then took the Crescent train, northbound, at the Birmingham Amtrak station. In April 1918, Major Houts and the 37th Division left Montgomery by train to Camp Lee (now Fort Lee), Virginia. Montgomery has no Amtrak station, so we had to entrain at Birmingham. We skipped Fort Lee, where the 37th spent only a month, and headed to New York.

In New York, we went to the South Street Seaport Museum, which used to have in its collection a large-scale model of the USS Leviathan – the ship used in June 1918 to transport Major Houts and a part of the 37th Division from Hoboken to Brest –, in its dazzle-camouflage paint. That is where we fell upon the sad part of our quest: the Museum has lost most of its collection in 2012 due to hurricane Sandy. They are still trying to save and restore some items, but the model of the Leviathan seems to be lost forever.

As we stayed in New Jersey, we took a ferry from the Hoboken terminal to the South of Manhattan. This was the closest we could do – ocean liners are getting rare – to the departing of the USS Leviathan in June 1918. The New York skyline has changed a lot since 1918, but the soldiers leaving for France saw the statue of Liberty getting thinner exactly as we saw it.

There is a lot of information we still have to analyze. So we probably will have more to share with you in the future. In the meantime, we would like to thank everyone we have met during our journey.

Claude Humbert, from France. I became interested in Euclid because of a WWI soldier, Major Arthur Samuel Houts (1880-1918), who lived in Euclid. I found his trunk in my great-aunt's attic. I eventualy decided to follow his footsteps, from Euclid to Montfaucon d'Argonne.