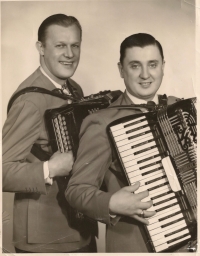 The the late Euclid bandleaders Johnny Pecon and Frank Yankovic, America’s Polka King, who both would have been 100 this year, were honored at the 52nd Thanksgiving Polka Party Weekend, staged at the Downtown Cleveland Marriott Hotel by the Euclid-based National Cleveland-Style Polka Hal of Fame and Museum, and the 28th annual polka music awards ceremony on Saturday, November 28, 2015. The awards show theme, “A Century of Cleveland-Style Polka,” saluted the Slovenian and American influences on the music, especially by Yankovic and Pecon, and Slovenia’s late polka powerhouse Slavko Avsenik. Pecon’s sons John and Jeff and Yankovic’s son Bob performed in honor of their fathers.

The Frank Stanger Orchestra enjoyed a three-peat win as Band of the Year. Frank Stanger, a native of Doylestown, OH, also collected trophies for Musician, Album and Song of the Year, as did bandmates Paul Yeager and Joe Zdelar for Side Musicians. The late Cleveland musician and radio host Eddie Bucar and the late drummer Dave Wolnik were inducted for their lifetime achievements in polka music.

Forty-two musicians appeared on the main stage in the traditional jam session on Friday evening. A high point was the Polka Mass, celebrated by Fr. Frank Perkovich of Minnesota, Cleveland’s Joey Tomsick Orchestra, and vocalist Cecilia Dolgan, a Hall of Famer and past President. Impromptu polka jam sessions extended into the wee hours.

"I heard about this polka festival in Las Vegas and I knew I had to come,” said Peter Geres from Saskatoon, Saskatchewan. “The music is first rate. I enjoy it so much I’m coming back next year.”

"It’s all about camaraderie,” added Euclid resident Mark Habat, Vice President of the Polka Hall of Fame and Chairman of the Thanksgiving weekend music festival. “Great music brings out the best in people.”

Other winners were Kathy Hlad for Button Accordionist; Patty C and the Guys for Button Accordion Ensemble; Al Bambic for Side Musician; the SNPJ Recreation Grounds in Kirtland, OH, for Culture and Heritage; and Ray Zalokar’s 247PolkaHeaven, the on-line polka channel, for Support and Promotion. Christine Hibbs, the Vocalist of the Year, was featured on the New Song of the Year, “Happy Birthday, Baby,” written by Frank Stanger and performed by his orchestra.

Musicians and leaders of Slovenian and nationality organizations founded the National Cleveland-Style Polka Hall of Fame in Euclid in 1987. Museum exhibits trace the story of Cleveland's home-grown dance music from its roots in the city’s Slovenian neighborhoods to nationwide popularity. Historic instruments include an accordion belonging to Frank Yankovic. The archive preserves 6,500 vintage recordings, some dating back a century

The Polka Hall of Fame and Museum is located at 605 East 222nd Street in Euclid, Ohio, in the historic former Euclid City Hall. Admission is free. Polka and Slovenian CDs are on sale on-line and in the museum store. Open Tuesday, Wednesday, Friday and Saturday, 11:00 to 4:00. For more information, call (216) 261-FAME, toll-free (866) 66-POLKA, or check Facebook or the website, www.polkafame.com.

Joseph Valencic is President of the National Cleveland-Style Polka Hall of Fame and Museum in the historic, old Euclid City Hall on East 222nd Street.