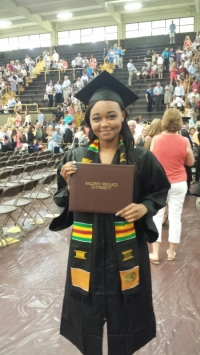 New Day Academy a Kindergarten through 12th grade college prep school had an exciting past two months.  May and June were exciting months for students and parents of New Day Academy, as many proud parents witnessed their children graduate from Kindergarten, eighth  grade, high school, and even college.  Each of these milestone events give the teachers and staff of New Day Academy the motivation and affirmation necessary to continue on in a career that on a day to day basis can become quite challenging.  Seeing the smiles on the faces of the children as they receive their degree, diploma, or certificate, and the flashes of cameras from proud parents and families, as their children and loved ones cross the stage, make it all worth it.

This year was extra special as New Day Academy saw its first College graduate.  Ashley Welch graduated from New Day Academy in 2011 and went on to further her education at Baldwin Wallace University, were this past May she completed all the requirements necessary to receive a bachelor’s degree in criminal Justice.  Ashley graduated in four years, which in of itself is an accomplishment, as most students take at least five years to complete bachelors.  What’s more amazing is that Ashley made it despite all the odds being stacked against her.  Before going to Baldwin Wallace, Ashley hadn’t ever really been away from Cliffview Rd., for any extended amount of time, so being on the campus of BW seemed like a world away from home and what she was used to, so many times she felt like she was out of place and should go home.  We at New Day are so glad she persevered and stayed.  Ashley attributes her success, “to a team of teachers at New Day Academy that instilled the importance of education, and always motivated her in the classroom and beyond.”

Although Ashley was the first New Day Academy graduate, she will not be the last as the school expects many more college graduates to come, as the school begins to see its initial graduating classes begin to complete four to five years of college. New Day Academy was established in 2004 and had its first high school graduation in 2010. The expectation for college graduates is bright, with students like the following from the class of 2015: T’ara Adams the class Valedictorian and Julai Matthews the class Salutatorian.  T’ara who received a total of $123,100 in scholarship will be furthering her education at the University of Akron.  Julai Mathews who received a total of $96,000 in scholarship offers will be attending Gannon University in Erie, Pennsylvania.  Stay updated with all the great things going on at New Day Academy such as what was presented in this article, by following us at: