Dontrell Callahan wants to be your Sensei 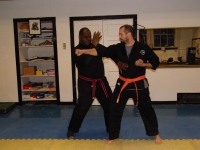 Dontrell Callahan slips into  one of his trademark smiles and says, "Martial arts is very different than most people think. Jackie Chan and Bruce Lee were great, and their aggressive, warrior roles captured me  as a boy.  But I came to learn the heart of martial arts is ATTENTION to what's going on inside you, to other people and to the situation you find yourself in. It calls for disciplined physical techniques, but it all starts with awareness."

The 37-year old sensei (teacher)of the Black Dragon Kenpo dojo  (training place) in the Shore Cultural Center should know. He's a third-degree black belt of the kenpo school of karate. He's been designated a "world class competitor," and you become aware it would not be a good idea to pick a fight with the Bowling Green University grad, who has also expressed himself as a writer, editor and singer. Callahan feels peaceful though, and the Euclid native confirms the impression. He emphasizes his martial arts tradition is defensive.

He says, "Martial arts is a tool for allowing a person to discover themselves and move in the world with attentiveness and self-control. The philosopher said, 'Know thyself.' If you don't have self-awareness and can't control yourself, how do you expect to achieve positive control in a challenging situation."

Callahan was first exposed to martial arts by his brother; then, three years running, the minister's son went to summer camp at Case University and spent all his time with the camp's martial arts instructor. He fell in love with the discipline and grace the practice brought to his life and he became a lifelong student. He took over a Euclid dojo from his sifu (master) and subsequently moved the school to the basement of Shore. Callahan will be pleased to explain to you the complex history and particulars of the martial arts variant  he teaches.

He will also be pleased to enroll your child or yourself in his school, which charges $45 for eight monthly classes. The word on the street is that Callahan is  a first-rate sensei, one who is gentle, sensitive and rigorous.

Euclid resident Sunny McClellan Morton says, "Dontrell is knowledgeable and strict about my sons' learning, but he’s also patient. My sons enjoy Black Dragon Kenpo so much my husband started, too. Now they all have something fun in common. They’re just not allowed to practice on each other in the living room."

Not in the living room, but absolutely in the Shore Center. Callahan is waiting there (216.450.0581) to tell you about Black Dragon Kenpo and what it can do for your children or yourself. He says, "I think I'm a much better Dontrell for martial arts. It's taught me to 'read the room,' to pick up cues, to use my energy and intelligence to move effectively in the world. It really has taught me to know and express myself. I love passing that way of knowledge on."

Longtime Euclid resident and former editor of a college magazine.