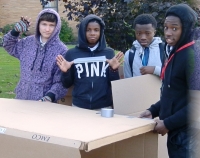 Homelessness - It’s something we’ve more than likely prayed we’ll never have to endure. Yet, for 14 dark and chilling hours, that’s exactly what a handful of New Day Academy (NDA) students volunteered to experience while staying overnight at a makeshift outdoor shelter.  So, why did these young boys and girls willingly brave the frigid night air with nothing more than a cardboard box for cover?  The answer to this question captures the very heart of "Shanty Town," a national program that New Day Academy has taken part in for several years to bring attention to the problem of homelessness.

Shanty Town is best understood as an overnight homeless experience designed to heighten the student’s sense of social responsibility, one of the desired outcomes of NDA’s academic model. For one entire evening, a small group of students, along with faculty members, gathered just outside the school on a tiny parcel of grass located at 32114 Vine Street in Willowick. They started setting up their “home” promptly at 4:30 pm. They began by laying down trash can liners in hopes of keeping the cold, damp ground from seeping in. Next, the students spread out old blankets and newspapers to serve as bedding. Finally, the “walls” went up, but only by way of a cardboard box intended to break the biting sting of the cold night air.

Each student was assigned to bring 1 can of soup to add to a communal pot.  If any one student forgot to bring his portion, well then, the others learned the grace of sharing. And when the soup was running low, the seemingly foregone skill of “moderation” was introduced.

With zero access to cell phones, computer games, or television, the students sat outside in an odd and unfamiliar silence, broken only by the discussion of how homelessness affects both our country and our communities.

It was about that time, after the sun had set, that Ms. Christiana Diaz had come on the scene…and she told the students a story they were not likely to soon forget.  You see, Ms. Diaz lived her life just as many do in our community.  She had a job, had a modest income, a sufficient home, and enjoyed the company of loving friends and family.

Through a series of seemingly benign circumstances, Ms. Diaz suddenly found herself out of work, out of her home, and, quite simply, out of luck. She went on to describe how difficult life was for her while living on the streets and how she never could have imagined that homelessness would ever touch her life personally. The students listened in stunned amazement as they realized Ms. Diaz’ circumstances could have happened to their sisters, their aunts, their mothers, even themselves.  Diaz credited Cleveland’s Transitional Housing as a means of overcoming her own homeless condition, however, the students sat in striking awe of how a seemingly minor event could alter one’s life so profoundly.

Do you think this experience sounds too harsh of an assignment for mere high school students? You might want to think again. “This experience opened my eyes to a lot!” reported one student. “Because of Shanty Town, I learned about taking responsibility for how my life plays out, how to value the small things in life, and how to care for, and show respect to the homeless.”

NDA’s Shanty Town is an example of service learning at its best. Instead of reading about one of our nations most prolific social concerns from a book, the students stood toe-to-toe with it throughout one single, unforgettable night. Yet, it was a night that will shape these New Day Academy students for a lifetime.

I am a proud supporter and employee of New Day Academy, a tuition-free, K thru 12 Community School located in the Shore Cultural Center in Euclid, Ohio. We have been preparing children to become leaders in their community for over 10 years. Why? NDA believes that every child deserves access to a world-class education - one which opens doors of opportunity for a lifetime!