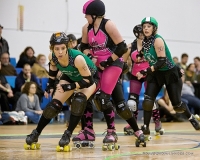 The Burning River Roller Girls will host their Championships bout Saturday, July 20 at the Ohio Nets Sports Complex in Parma, with tickets available at www.brownpapertickets.com/producer/244691. We took a moment to catch up with seventh year veteran skater and Euclid local Eva Lucien, to find out what drives her to keep coming back for more.

How long have you been playing roller derby?:  7 years and counting

Did you play anywhere else before joining BRRG?:  I've played other team sports, but not roller derby. When I signed onto Burning River Roller Girls when the league was formed in 2006, the two closest roller derby leagues were Columbus and Pittsburgh. We became the 50th league to join the Women's Flat Track Derby Association (WFTDA) in December of 2006. Since that time, derby has spread internationally; there are currently 295 leagues affiliated with the WFTDA.

What’s your favorite thing about Euclid?:  Diversity of the residents and proximity to the Lake.

What benefits do you think roller derby brings to the community?: Roller derby fills a much-needed, uncommon niche as a full-contact sport for women. It's an important athletic and emotional outlet for our members, and for volunteers and spectators it's a fun, genuine, and unconventional form of entertainment that contrasts sharply with professional sports. The strategy and skating part of it make it a fascinating and exciting sport to watch—there's nothing quite like the adrenaline rush of a great roller derby game.

What do you think is the future of roller derby?: It's still very much a DIY sport, but its increasing popularity in the U.S. and abroad—as well as the growing presence of men's and junior derby—will shape it in ways that are exciting but hard to predict. I'd guess there will be more mainstream awareness of roller derby as a sport; hopefully it can preserve some if its unique character in the face of increasing pressure to become profitable.

Roller derby sets a positive example of acceptance of LGBTQ athletes as both integral to the sport and, at the end of the day, a big non-issue; hopefully we can have a positive influence on other sports in that regard. I'd love to see more racial and ethnic diversity as roller derby moves from its predominantly white, American punk-rock roots to something more cosmopolitan. I hope it remains strong in the area of women's equality.

What is your personal motto when it comes to competitive sports?: Nothing profound: You get out of it exactly what you put in, and there is always room for improvement.

If people should know one thing about derby, it is:  It's so much fun.

Come cheer on the Rolling Pin-Ups, the Hardknockers, the Cleveland Steamers, or the Hellbombers on July 20 to see Eva Lucien and other dazzling local skaters in action! For more information, visit www.burningriverrollergirls.com.