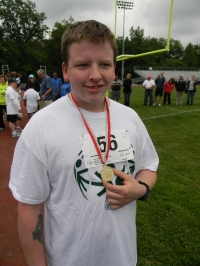 James poses with his two gold medals; one for the softball throw, and the other for the 50 yard dash.

A couple Saturdays agao, June 8, 2013, in Westlake Ohio, James A. Sparks Jr., headed to the Special Olympics held at Westlake High School. James is a 2011 graduate from The Euclid High School and former track team member. James has been involved with the Special Olympics since grade school and has now entered as a young adult. The weather was fantastic and he had his own cheering section, his grandfather James Kendel, a Euclid resident of 43 years, his mother Heather Kendel also a lifetime resident, his godson Kenneth and David from Piece by Peace Agency. The weather was perfect not too hot and by no means cold.

He arrived ready to go and anxious to get started. After a wonderful opening ceremony and traditional procession behind the flame, the National Anthem was sung by all and the games began. First was the softball throw in which James was a Gold Medal winner in his heat and the second farthest thrower of the day. He then warmed up and waited his turn to take to the track where he feels most at home running. He lined up at the start and when it was time to go he jetted like an airplane, running so fast it was almost impossible to take a photo. James won first place and was able to add another Gold to his collection from throughout the years.

These are the moments when life makes one stop and think wow, this really is a special event, a time for all of us to remember that we can accomplish many things if we have the spirit. The joy in the faces of those who were participating, just being there was happiness to them, were priceless. Medal or no medal, the act of trying is sufficient to each one of the competitors. It breaks one's heart to hear the laughter and brings tears of joy in their accomplishments.

Congratulations to James Sparks Jr., and thank you to all those who volunteered and the Knights of Columbus for their tireless and selfless acts to raise funds for events such as these. My son walked around with his medals on for two days afterwards which again reminded me to enjoy life’s treasures, such as moments like these.

Heather Kendel is a single mom of 4 and has lived most of her life in Euclid. She is the Director and Founder of ASL Advocates, a local grassroots non-profit to help the Deaf, Deaf-Blind and Hard of Hearing within the community.

I am a single mom of 4 and have lived most of my life in Euclid. I am the Director and Founder of ASL Advocates a local grassroots non-profit to help the Deaf, Deaf-Blind and Hard of Hearing within the community.