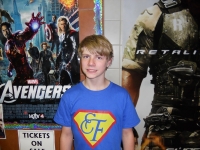 Daniel from Euclid, Ohio won movie tickets to The Avengers and treats from Atlas Cinemas. He was also made a “millionaire for day” and received interest on $1,000,000. Daniel attends Forest Park Middle School, his parents deposited money to their children’s accounts in honor of their recently deceased grandfather.