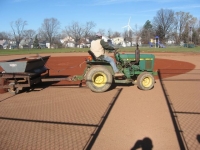 Euclid Boys League spearheaded repairs to Hero Park on E. 228th and Willow Field this past fall. Because renovation costs were split with the City, fields are now in much better shape as play begins in EBL's 60th season.

The Euclid Boys League (EBL) is looking forward to a summer of baseball with 195 players registered for the league this year. Celebrating its 60th year in the City, the 2012 season is looking like a promising one for the volunteer-run organization.

Not only are registrations for this year’s league running strong, but EBL has invested thousands of dollars in upgrading several fields. This past fall Willow Field and Hero’s Park (E. 228th Street) both received significant upgrades as the playing fields were reconditioned. EBL was able to upgrade these fields at a cost of nearly $12,000 with EBL and the City sharing in the cost to upgrade. The upgraded fields will allow for play in wetter conditions as drainage is improved on those fields.

“We are continuing to look at opportunities to upgrade the fields in Euclidwhenever we can,” said EBL League President Anthony Stachnik. “Euclid Boys League wants to help give our players and the community ballfields that we can be proud of. When we have money to invest, we’ll partner with the City to upgrade things whenever possible.” Stachnik noted that because EBL is a non-profit organization, monies donated are tax-deductible. Aside from donations and sponsorships, EBL hosts an annual fundraiser that is crucial to raising funds to make the improvements. The general public is invited and is important to continued success. This year the League supplemented every child who registered by approximately $30 per player to keep registration costs low.

EBL will continue to look for ways to upgrade different ball fields. Several fields, including those owned by Euclid Public Schools, still need upgrading for safety reasons. Stachnik is hoping the league’s relationship with the schools will result in upgrading these fields to enhance safety and usage. (At press time, a deal between the schools and EBL was in discussion with EBL funding $4,000 and the schools funding $2,382 for work to one of the Forest Park fields.)

“This is about being a community, having pride and expectations of where we live and the facilities we provide to our citizens.” In addition to the fields, new fencing, dugout areas and on-deck circles are being discussed. With the temporary loss of several fields due to the construction of new schools, EBL has had to juggle scheduling as well.

The season kicks off May 12 including a celebration of the 60th anniversary of Euclid Boys League (EBL) and Picture Day.  The daylong celebration will feature a cookout and opening day games played under the lights. With registrations now completed, players can look forward to a call from their coaches as practices begin in April. The season runs through mid-to-late July with playoffs tournament.

The EBL is also sponsoring Night Out With Euclid Boys League, June 8 at Tizzano’s. This community event is a major fundraiser for the EBL and attracts about 200 league supporters every year. This is the only fundraiser for EBL. “It was because of the success of this event and the generosity of our community that our league was able to help invest in the fields.”

Someone who lives in Euclid, enjoys writing and wants to stay informed. My wife and I have two children and live in the northeast part of the City. We are active in many Euclid recreation activities.