Annual Youth, Citizen, Business and Kiwanian of the Year Awards 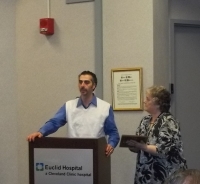 On Wednesday, March 14 at 6:30pm, the Kiwanis Club of Euclid held its annual Youth, Citizen, Business and Kiwanian of the Year award ceremony in the Waltz Auditorium of the Euclid Hospital.

Husband and wife, Chris and Gloria Burford were awarded Citizens of the Year. The Burfords have made it their life’s mission to serve as foster parents for children in the Cleveland/Greater Cleveland area. Over the past 8 years, the Burfords have fostered 34 children which led to the adoption of 4. Gloria Burford states, “It takes a village to raise these children and we have to start somewhere.”

Dr. Kari Cunningham was the recipient of the 2012 Kiwanian of the Year award. Serving a second term as President, Dr. Cunningham has worked to make the Kiwanis Club of Euclid more visible within the community and helped the club update its constitution and bylaws. Dr. Cunningham is currently finishing a residency in pediatric dentistry at Rainbow Babies and Children’s Hospital.

The Kiwanis Club of Euclid is a part of Kiwanis International, an organization aimed at serving the children of the world – one child, one community at a time. Euclid Kiwanis has been serving the Euclid community since 1927. Some of the many community service projects include Kids in Safety Seats with the Euclid Police Department, the Terrific Kids Program to recognize excellence in preschool-aged children, ongoing support of the Mary Mavec Opportunity School for individuals with mental and physical handicaps, the Boots and Shoes program with Payless Shoe Source, and the Frank B. Davis Memorial Scholarship for graduating high school seniors. Annual fundraisers that thrive off of community participation are the Sweetheart Bowl-A-Thon, Pancake Breakfast, Corn Roast, and Poor Man’s Raffle, to name a few. All proceeds are returned to the community and children worldwide.

The Kiwanis Club of Euclid meets on the second and fourth Wednesdays of the month at 6:00pm for dinner and 6:30pm for the meeting in the Lake Erie Room on the ground floor of Euclid Hospital, located at 18901 Lake Shore Blvd. Euclid, OH 44119. For more information, visit us on the web at www.euclidkiwanis.org or email us at euclidkiwanis@gmail.com.

Kari Cunningham is the president of the Kiwanis Club of Euclid.

President of the Kiwanis Club of Euclid.

Read More on Euclid Gives Back