Beer Joints R Us: Supporting local businesses, one tavern at a time! 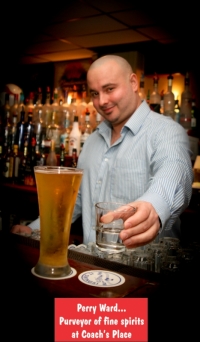 Coach's Place has indeed been around awhile. Not quite sure how long, but l'm sure it was long before we put a man in space... and we probably needed a can opener to open up a can of Schlitz! It was the Buckhorn Saloon, Bunky’s Place, but it is indeed now, Coach’s Place.

Perry Ward is the latest purveyor of fine spirits behind the bar at Coach's Place  and likely one of the best. Just sitting down with Perry you get the feeling that he's always planning the next BIG THING.

The next big thing is Saint Patrick's Day. His objective is to make it “GROUND ZERO” for this year’s celebration. He's opening at 6 am, serving up 22oz. Harps on draught, Guinness in bottles, a shot of Jameson or a Corned Beef Sandwich. Certainly a menu of the day., and the best part... they’re  all available for only $2.25 each.
Good deals are really par for the course at Coach’s Place.  Speaking of par, Perry’s next event (after the St. Patty’s Day Blast) is the Spring Golf  Outing, scheduled for this Spring. From golfing to “Christmas in July” Party. Seriously this guy doesn’t quit!

Now that the E. 185th Street Festival is history, you may have heard of  “PERRY-FEST”? If you haven’t... YOU WILL! Coach’s Place’s Anniversary is Aug. 25th and over 1000 folks knew about it and attended last year.Big Tents. Live Music. The Works! Over 250 lbs. of free food was consumed. This year’s menu will include Mahi-mahi and a Pig Roast.
BREAKFAST CLUB, often called the Best 80’s Cover band in Cleveland, will headline this year’s Perry-Fest. Other acts include Ted Riser, Michael Allman, (yep, Gregg’s son) and the Elm Street Blues Band.

Perry’s also quite a philanthropist, and he gives a lot of stuff away, too! Last year he provided over 2000 meals as a result of his very successful Christmas Party.

All the Cavs games can be seen at Coach’s Place and as always the “Red & Gold” Drink Menu Specials are available.
If you haven’t visited Coach’s Place yet, stop in and say “Hey” to Perry & the girls!

GET YOUR FREE BEER JOINTS R US T-Shirt! Simply visit www.BeerJointsRUs.com and download your coupon! Stop in your favorite BJRUs Establishment and claim it. Limited supply so don’t delay! Businesses will be featuring weekly specials, for those wearing the BJRUs Tees.  More to come! Let’s pull up a stool and discuss it!