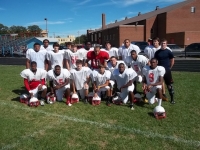 As the Villa Angela-St. Joseph football squad ran through a series of drills during a pre-season practice session, one young alumnus watched intently from the edge of the bleachers, perhaps looking for clues as to what the upcoming season might bring.

“I graduated in 2004,” he told another spectator. “My senior year was the last year that we made the state playoffs.”

Not only did the Vikings qualify for the playoffs that season, but they made it all the way to the Division V state finals in Massillon and brought back the state runner-up trophy. Could this be the year they make another serious post-season run?

Certainly, if that young grad saw the opening game against Our Lady of the Lakes, he must have been impressed—especially in the first two quarters. The Vikings jumped out to a 34-0 halftime lead as they overpowered the Michigan prep school for the second year in a row. Five different players scored touchdowns as Coach John Storey’s gridders chalked up a 41-14 victory, amassing 287 yards on offense while holding the visitors to just 141 yards.

With 21 seniors on the team, including a solid nucleus of lettermen, many of the VASJ players were brimming with optimism prior to the opener. There was considerable talk about the “senior leadership” factor. However, it was a junior— Devon Bolden—who made the biggest impact in the opening triumph. The 5-8, 150-pound scatback gained 98 yards on 15 carries, averaging 6.5 yards per carry, and scored on touchdown runs of 32 and 36 yards.

Bolden’s performance came as little surprise to those who follow VASJ closely. Last season, as a sophomore, he showed flashes of brilliance and earned a spot on the Observer’s yearend All-Star team.

Despite the Vikings’ overall talent level, some fans may have been concerned about a lack of experience at quarterback. After all, the starting signal-caller, 6-2 senior Anthony Sywanyk, had no previous varsity game experience behind center. He had performed well in pre-season scrimmages, Coach Storey pointed out, but the real test was yet to come.

Against Our Lady of the Lakes, Sywanyk earned better than a passing grade in his varsity debut. He overcame any first-game jitters in a hurry as he raced 72 yards in the first quarter to score the Vikings’ first touchdown. In the second quarter he threw his first varsity TD pass—a 34-yarder to C. J. Germany--to put VASJ on top, 27-0. For the game, Sywanyk finished with 5 completions in 15 attempts for 55 yards, with just one interception. The backup quarterback is Ryan Gallagher, one of the team co-captains who is slotted for duty as a wide receiver on offense.

Also contributing to the Vikings’ touchdown parade were tailback Tim Harrison, the other co-captain, on a one-yard run, and speedster Rodney Burse on a 92-yard punt return. Harrison, a 210-pound power runner, finished the game with 66 yards on seven carries for an impressive average of 9.4 yards per carry. Burse was a star sprinter on the track team last spring, earning a district championship in the 100-meter dash.

Most of the VASJ starters were pulled in the third quarter, enabling quite a few of the 20 freshmen on the squad to get a taste of varsity action in the second half.

Coach Storey is not one to make bold predictions—at least not with regard to his team’s state playoff chances. But, even prior to the opening game, it was clear that he felt more than a little optimistic about this season. “We did well in our scrimmages,” Storey noted. “We’re ahead of last year. And I think we’ll be competitive in our division in the North Coast League. Our goal is to win the White Division championship.”

To accomplish that, the Vikings will have to overcome a few major obstacles. Holy Name and Cleveland Central Catholic, to name just two. For what it’s worth, the Cleveland Plain Dealer picked the Vikings to finish third in their division behind those two schools. Holy Name, which struggled against the likes of Padua, Lake Catholic and Archbishop Hoban in the NCL Blue Division last season, has dropped down into the “small school” White Division, which also includes Trinity, St. Peter Chanel and Warren JFK.

In a game that could have title implications, VASJ is scheduled to play Holy Name on Oct. 22 at North Royalton’s stadium. The Namers stumbled in their opening game, losing to Medina Highland, 49-14. Meanwhile Central Catholic squeezed past Columbia, 24-23. The Vikings play the Ironmen Oct. 1, in another “away” game.

Ryan Gallagher: The 6-foot, 170-pound senior co-captain plays receiver on offense and outside linebacker on defense. Last season, he was credited with 91 tackles and four interceptions in earning defensive player of the year honors. “He’s also our backup quarterback and plays on our return teams,” Coach Storey says. “You name it, he’s on it.”

Ryan’s father, Pat Gallagher, played on the 1981 St. Joseph High playoff team. His younger brother Jack, a freshman, plays for the VASJ golf squad and is a kicker on the football team. Ryan suffered a minor pre-season knee injury and was expected to miss the first game or two.

Tim Harrison: the 5-10, 215-pound running back/linebacker is a three-year starter and co-captain. Last year, he rushed for 369 yards and scored five touchdowns, earning Observer All-Star recognition. “He’s been doing a nice job in a leadership role,” says Coach Storey. “We’re looking for him to have an outstanding senior year.”

Two Mid-American Conference schools, Bowling Green and Kent State, have shown interest in Harrison, who recently ran the 40-yard dash in 4.63 seconds, despite being slowed by an off-season foot injury. He expects to improve on that time. “Because of the injury, I missed a lot of speed training during the off season,” he notes.

DiAnte Jackson: a 6-2, 200-pound offensive guard and defensive end, Jackson was one of the top Viking matmen last winter and qualified for the state wrestling tournament. “He’s a real good technician on the offensive front line,” says Coach Storey. “He should come into his own on defense this season. He has a lot of experience rushing the passer.”

Daniel Ward: a versatile 5-10, 160-pound center, Ward is in his second year as a starter. “He’s a mainstay on the offensive front line,” the coach notes. “He’s a tough kid. He also plays on our kick return teams. And he’s our long snapper.”

Adam Scott: a third-year starter, Scott is a 6-0, 265-pound offensive guard and defensive tackle. “He has improved every year,” says Coach Storey. “We expect him to have an outstanding year and to be dominating on the defensive front.”

Paul Rini: Another Viking wrestler, Rini is a 6-0, 175-pound offensive guard and defensive end. “Offensively, he’s a good technician,” the coach explains. “On defense, he will rely on his quickness to make plays.” Paul is following in the footsteps of his father, Tony Rini, who was also a wrestler and football player for St. Joe’s.

Ed Basemore: a 6-2, 215-pound offensive and defensive tackle, Basemore was tabbed as the Plain Dealer’s pre-season “most valuable lineman” in the NCL White Division. This is his second year as a starter for the Viking gridders. “We’re looking for him to have a good, solid year,” says Coach Storey.