Panther golfers off to a fast start 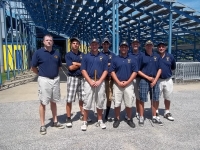 Last year the Euclid Panther golf team had, in the words of Coach Bob Torelli, a “so-so season,” finishing third in the Lake Erie League. But this fall they expect to move up a notch—or two.

“We’d like to win the LEL championship this year,” says Torelli, who has been coaching the team for 11 years. “We have five returning golfers who are starters and they’ve been showing good course management. We’ve gotten off to a good start.”

Torelli, who shares the coaching duties with Greg Baca, noted that the Euclid linksmen had won six of their first eight dual matches. Since then, they’ve added to their victory total.

One of the Panthers’ five veterans is senior Danny Essel, the team captain who has been averaging about 41 strokes for nine holes. The others are senior Tony Jelenic, juniors Alex Clack and James Cerny, and sophomore Cameron Fuller.

In late August the Panthers beat Shaker Heights, 172-186, as Essel carded a 40 at Highland Park Golf Course. Cerny tied for second with a 42.  The next day, they easily coasted past Cleveland Heights, 168-239, as Clack set the pace with a 39, while Essel and Cerny each carded 42s.

The LEL title is based 50 percent on dual match results and 50 percent on the LEL tournament, which is slated for Sept. 22. In upcoming outings, Euclid will host Shaker on Sept. 7 and Cleveland Heights on Sept. 8 at Briardale Greens. The Panthers’ other home matches include visits by the Brush Arcs on Sept. 14 and Bedford on Sept. 15, starting about 3:15 p.m. The Division I sectional, the first step toward a berth in the state tournament, will be held at Quail Hollow in early October. The state tournament is scheduled for Oct. 21-22 at Ohio State’s Scarlet course.

During Torelli’s coaching tenure, Euclid’s best LEL showing was a second-place finish behind Mentor in 2005. With Mentor no longer in the league and the Panthers fielding a talented squad, this just might be the year that they bring home the big trophy.

VIKINGS TOP CHANEL – After a loss to Euclid in their season opening match, the Villa Angela-St. Joseph Vikings competed in several multi-team invitational tournaments before returning to the dual-match mode. They recorded their first victory in late August when they easily clipped the Chanel Firebirds, 169-241, at Briardale Greens as Jeff Grudzinski set the pace with a 40, while Pat Mastalski posted a 41 and Adam Keys a 42.

A day earlier, the VASJ golfers lost a close contest to Trinity at Shawnee Hills, 178-181, with Grudzinski carding a 42, while Mastalski and Lenny Cervenik each contributed a 46.