A local love affair with an old fashioned love story 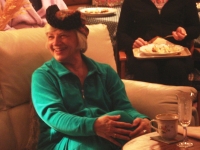 Very early April 29, eleven royal watchers gathered at the Euclid home of Carole Price to view the “Wedding of the Century.”  Network coverage began at 4 a.m. and so did they.  Due to the hour, required attire consisted of PJs, robe and slippers, and with a nod to British nuptial protocol, stylish hats!  Sipping mimosas and Bloody Marys, and noshing on a buffet brunch, the activities across the pond were thoroughly dissected.  All agreed the bride was exquisite, the groom handsome in uniform, and the ceremony hit just the right notes.

Viewing parties are not new to this group.  In l973 several of the group were around to watch Princess Anne marry Captain Mark Phillips.  The group increased in size in1981 when vigil was kept for the marriage of Prince Charles and Lady Diana.  Gatherings continued through the wedding of Prince Andrew and Sarah Ferguson and sadly, Princess Diana’s funeral.

Word has it that Zara Phillips, the daughter of Princess Anne, will marry her rugby player July 30 in Edinburgh, Scotland.  If the event is televised the women will surely be on hand to mark the festivities -- no matter the hour.