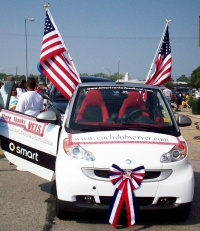 Memorial Day is the day when families and friends gather together to celebrate the long weekend and to honor those men and women who have fought for our freedom. The city of Euclid continues to do this in an extraordinary fashion. For more than 80 years, military personnel have been remembered by our community for their service to our country.

According to Chuck Hill, who serves as the Joint Veterans Council Chairman, Euclid’s annual parade and graveside service dates back to 1930 when services were held at St. Paul and Euclid Village Cemeteries, with speakers at Euclid Central High School, under the guidance of the Euclid American Legion, Post #343.  Prior to 1930, Euclid Village held Memorial Day observances in 1924 and 1925 under the guidance of the village council.

This year’s parade was another intergenerational event that honored our military personnel and celebrated the fine organizations and residents of our community. Many of these men and women walked the entire distance of the parade route and others were visible through the window of a trolley or car offering a cheery smile and an affectionate wave. This group was given a special salute by the Euclid Safety Forces at the start of the parade. Younger generations of parade watchers were able to observe, first hand, the respect that is given to these patriots.

Joining the veterans in the parade were an array of participants such as city leaders, safety forces, youth organizations, marching bands and members from a variety of community entities. The energy level was high, the weather was beautiful, and this signature event exuded community pride.

As judges of the parade who have had the absolute honor of enjoying the parade from the viewing stand, we would like to extend our gratitude to those who understand the importance of this event and have made a continued commitment in keeping this holiday tradition alive. We wish to thank the various veteran posts, the city of Euclid, those who participated in the parade, and those who came out to view this spectacular event.

Congratulations to the following who were awarded parade trophies: